Sale on canvas prints! Use code ABCXYZ at checkout for a special discount!

Castles Made of Sand - attached the lyrics 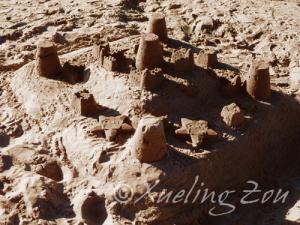 The title of this photo came from one of Jimi Hendrix's songs - "And so castles made of sand fall in the sea, eventually...".

I took a photo of this little sand castle built by some kids left behind on the beach at Monterey, CA. It wasn't because of the wonderful light and shadow contrast, etc., rather because it reminds me that everyone has their own dreams since childhood. We all started building them up by learning and hard working. Some dreams will be left behind and washed away by time's passing. I wonder how many of the dreams each person can hold on to and never let them go.

The lyrics of "Castles Made of Sand":
"Down the street you can hear her scream you're a disgrace
As she slams the door in his drunken face
And now he stands outside
And all the neighbors start to gossip and drool
He cries oh, girl you must be mad,
What happened to the sweet love you and me had?
Against the door he leans and starts a scene,
And his tears fall and burn the garden green

And so castles made of sand fall in the sea, eventually
[ Lyrics from: http://www.lyricsfreak.com/j/jimi+hendrix/castles+made+of+sand_20071547.html ]
A little Indian brave who before he was ten,
Played war games in the woods with his Indian friends
And he built up a dream that when he grew up
He would be a fearless warrior Indian Cheif
Many moons past and more the dream grew strong until
Tomorrow he would sing his first war song and fight his first battle
But something went wrong, surprise attack killed him in his sleep that night

And so castles made of sand melts into the sea, eventually

There was a young girl, who's heart was a frown
Cause she was crippled for life,
And she couldn't speak a sound
And she wished and prayed she could stop living,
So she decided to die
She drew her wheelchair to the edge of the shore
And to her legs she smiled you wont hurt me no more
But then a sight she'd never seen made her jump and say
Look a golden winged ship is passing my way

And it really didn't have to stop, it just kept on going...

And so castles made of sand slips into the sea, eventually..." 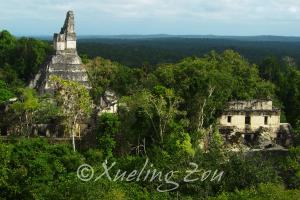 Tikal in its heyday ca 700 AD, was the capital of a vast Mayan empire. The Tikal National Park, in the Peten region in Northern Guatemala, comprises and area of 222 square miles or 576 square km. The park contains some of the most fascinating archaeological remains of the ancient Maya Civilization. Tikal is the largest excavated site in the American continent. Many mounds covered by a thick layer of jungle for over one thousand years have been left untouched as found by archaeologists. Restoration has continued since 1956.

Before the East Coast Earthquake 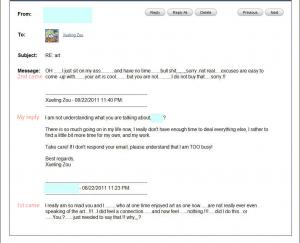 Strangely enough, I received 2 unusual email from a FAA member who lives nearby where the earthquake happened the night before. Please see the attached the screen shot(or the copies of emails below). I am not sure if this kind of behavior is related to the East Coast Earthquake (I heard that animals may not behave usual before the earthquakes.), or if I am the only one victim?? It will be better for all the FAA members if we have the choice can block some unwanted emails, won't it?

I've noticed the attachment is not readable. So here is:

I am not understanding what you are talking about, XXXXX?

There is so much going on in my life now, I really don't have enough time to deal everything else, I rather to find a little bit more time for my own, and my work.

Take care! If I don't respond your email, please understand that I am TOO busy! 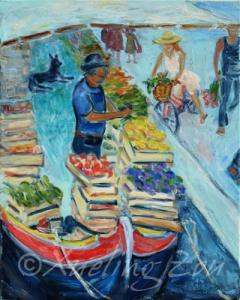 This painting was created based on a photo I took by using my very first Kodak digital camera 12 years ago in Venice, Italy before I started painting. I finished this work faster compared to how long I had been thinking about it...

I can never forget about the fresh food (organic?) and beautiful scenery there, want to go back all the time...

The Spirit of the Sea - Pacific Voyagers II 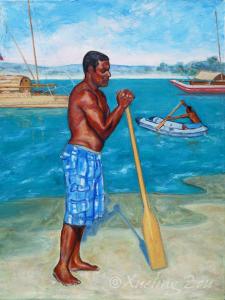 What a great inspiration! Unknown in advance, I had seen the Pacific Voyagers and seven boats at Monterey Bay, California!

August 13, 2011, late afternoon sun shone on the weekend Monterey beach. I saw some unusual boats, actually ancient looking boats, mostly like the boats made by Maori people from New Zealand, anchored to the beach in the bay.

I was so attracted by the beauty of those boats, and a couple of handsome sailors paddling people back and forth from the beach to the boats. I didn't want to miss this good opportunity, and started shooting...

A local lady chatted with me that these were Pacific Voyagers - a group of Pacific Islanders from Aotearoa (New Zealand), Cook Islands, Fiji, Samoa, Tahiti, Papua New Guinea, Solomon Islands, Kiribati, Vanuatu, and Tonga. They started in April of this year, passing the Marquesas, and Hawaii on their journey.

Also she said that I missed seeing the landing, which was a traditional American Indian ceremony for welcoming friends from afar. A great amount of people watching and it was a quite emotional time for everyone...

The challenging part was how to create this incredible story, also a historical record on canvas(es) to pass the message through my artist's perspective, and to contribute to the community... Took me for almost a month.

Luckily, I was there, saw them, and took some footage... working through the ideas, overcoming all the difficulties, and they are finished now... Using a traditional style, to show my respect for these brave Voyagers who sailed ancient Polynesian vaka moana boats to renew their commitment to healthy ecosystems for future generations.

or read the whole story at: http://originalartstories.blogspot.com/2011/09/pacific-voyagers.html

"Our mission is simple: Use the wisdom of our ancestors, combined with modern science, to propel us into a more sustainable future, help heal our injured ocean, raise awareness, and to revive our cultural traditions of voyaging. Demographically, our crews vary. We have come together from many islands, men and women, young and older, to sail our seven vaka as one," the group explained...

Pacific Voyaging began when the world’s first seafarers set off in vaka moanas, ocean canoes, from Asia, most likely South China, in the hopes of finding other lands. They found New Guinea, the Bismarck Archipelago, and the Solomon Islands first. Thousands of years later, the ancestors continued their journey and within 2500 years they reached the more remote Hawaiian Islands, Rapanui, and Aotearoa, establishing communities at each location with the root crops, fruit seeds, and domestic animals they carried on their voyage.

Our amazing voyaging ancestors used only Mother Nature to guide them on their journey. Using only the sun, the stars, wind, waves, clouds, and wildlife as guides, they successfully sailed across the Pacific Ocean and settled our lands. This way of navigating was on the brink of extinction until one individual began to revive the artful skill. Pius Mau Piailug, a Micronesian navigator, afraid of his people losing this skill as a result of westernization, brought his skills to the Polynesian Voyaging Society. He, along with his protégé, HawaiinNainoa Thompson, began to revive the skill. In 1976, they successfully sailed the Hokule’a. Today, we continue reviving this cultural tradition. The crews on our seven vaka moanas learn this skill, honing the craft throughout their journey. We feel honoured to continue in the wake of our ancestors, learning from their ancient wisdom, and venturing forth into the future with a new mission of healing our ocean and a rejuvenated Te Mana o Te Moana, the Spirit of the Sea. 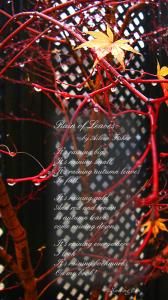 I've found Aileen Fisher's Rain of Leaves perfectly fits into my capture, simple and delightful. Welcome to join my new blog at: http://originalartstories.blogspot.com/

It's raining gold
And red and brown
as autumn leaves
come raining down. 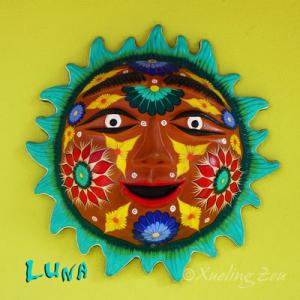 The Chinese Moon Festival (also called the Mooncake or Mid-Autumn festival) is held on the 15th day of the eighth month in the Chinese calendar, fell on September 12, 2011. When the moon is at its maximum brightness for the entire year, the Chinese celebrate "zhong qiu jie".

Chinese culture is deeply imbedded in traditional festival. The Moon Festival is one of the most important traditional events, just like Christmas and Thanksgiving in the West.

The legend surrounding this occasion is about a beautiful lady named "chang er", who flew to the moon with her beloved rabbit named "yu tu" whose coat was pure white as white jade and they have lived there forever. Children are told the story of the moon fairy living in a crystal palace, who comes out to dance on the moon's shadowed surface.

The moon cake is the food for the Moon Festival. The Chinese families hold reunions together spending their evening tasting delicious moon cakes with some wine while watching the full moon. The legend, the families and the poems, you can't help but thinking that this is really a perfect world. That is why the Chinese are so fond of the Moon Festival.